Dr. Elizabeth Maly, an Associate Professor at the International Research Institute of Disaster Science, Tohoku University, Sendai, Japan, discussed the findings of her collaborative study with the former VP-RDE, Dr. Ma. Cristina I. Caintic and Prof. Faustito A. Aure, the former Extension Director, and now the Director for Internationalization, during the 10th Episode of Haiyan Conversations, August 28 at 10:00 o’clock in the morning via zoom.

The research focused on looking into the recovery plan of Tacloban City after Yolanda/ Haiyan such as “What are all the plans and projects for new houses and new schools?”; “What are the governments and NGO projects?”; and “What are the experiences of people in Tacloban during the relocation process Post-Yolanda?”.

Dr. Maly revealed the many challenges faced by the dwellers in the different housing resettlement sites such as problems with transportation, far from the workplace, far from water facility/familiar places, far from downtown/market, far from children’s schools, far from stores, and far/inconvenient.

The resettlers expressed that if given enough resources, these are the things they would like to do with their house: add second floor, add kitchen/ dish washing area, add rooms/ make division, extension, ceiling, paint/tiles, canvas cover/small roof extension, windows, doors, improve front yard/door, store, improvements to keep water from coming in, improve the bathroom, balcony, among others.

Dr. Maly further shared the key findings and future research potentials in relation to the study, namely: the study was a small pilot study with a small number of respondents, and the combination of FGD and household survey could be used to triangulate information, especially for the topic of schools, (however, some differences with FGD in school and community), the researchers could see schools function as a community asset, especially for schools inside the resettlement area, consider other community assets(livelihood, leadership, homeowners association.) and continue this collaboration with local university -EVSU to connect with community outreach.

When asked about the biggest challenges she encountered while conducting the study, Dr. Maly mentioned relying on her local counterparts and the potential knowledge gap. However, she was appreciative of the participants of the study for their willingness to share information, being curious and friendly to them.

The reactor of the webinar, Prof. Miah Maye Pormon, UP Visayas- Tacloban Campus, corroborated the findings of the study. She suggested that more expounded studies should be conducted and should capture the holistic aspect of house resettlement satisfaction. “There should be proper identification of formal layout in determining optimal housing.”, she further stressed.

One of the participants asked whether the findings of the study were shared with the National Housing Authority, Development sectors, National Economic and Development Authority, and even in the Research Development Council of Region VIII. Dr. Maly responded that her team failed to share this information with the government entities but was glad to accept the suggestion.

The former VP-RDE of Eastern Visayas State University, Dr. Caintic suggested that Dr. Analyn C. Españo, the newly designated VP-RDE of EVSU may present the findings of the study to the members of the Research Development Council. She further mentioned that the study was already published and can be accessed online.

On the other hand, Dr. Españo suggested that Dr. Maly should write a letter to the Research Development Council with a capsule of the paper as a reference for proper dissemination of the study with the assurance that she will facilitate the presentation of the said study to the RDC Region VIII.

Dr. Españo expressed her gratitude to the resource person for bringing out the crucial role of schools as drivers for community development. She further mentioned that there should be a sequel to the study and the Office of Research is willing to be part of the said endeavor.

In addition, Prof. Pormon, the reactor, mentioned that climate and disaster awareness education could also be included in the schools located in these resettlement areas which was seconded by Dr. Caintic that an in-depth study of disaster and post-disaster initiatives should also be considered 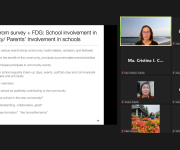