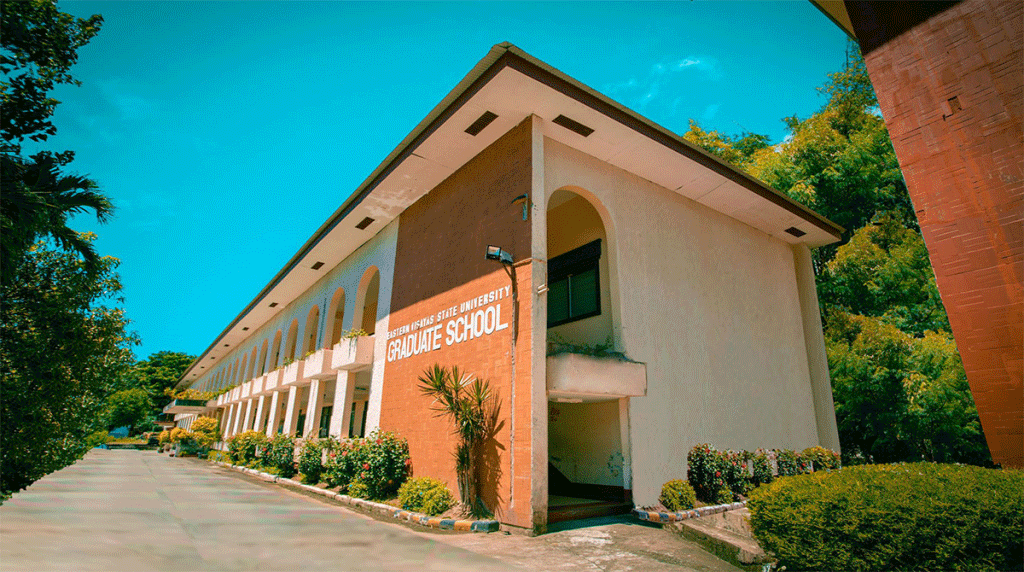 The Graduate School is one of the academic units of the ever-growing Eastern Visayas State University. Responding to the challenge of the times and fostering the commitment of the university, the graduate programs of EVSU provide avenues for building human capital in the field of teaching and education technology, engineering, information technology, business management, community development, and public resource management. Geared towards the holistic development of its students, the Graduate School offers inclusive training for more effective service of leaders in academic institutions, technical and industrial organizations, government and non-government agencies. It primarily aims to prepare frontline leadership, produce change agents and generate innovators in various fields of specialization.

It was during School Year 1986-1987 that Doctor of Philosophy major in Educational Programs Management  and Master of Arts in Education major in Home Economics and  major in Guidance and Counselling  were implemented.

From 1987 to 1994, Dr. Iluminado C. Nical was designated as the officer-in-charge of Graduate Studies department. It was in 1992 that Master of Arts in Instruction and Supervision majors in Mathematics Teaching- Elementary and Mathematics Teaching- Secondary, Communication Arts, Basic and Advanced Science and Physical Education were added to the list of its master’s level programs.  True to its mission, Master in Rural Development – Plan A  (thesis program) was offered in 1993 to respond to the emergent needs of the communities.

As a technological learning institution, the academic offerings expanded and in 1997 Master in Engineering was offered with three majors, namely, Civil, Electrical, and Mechanical Engineering, by virtue of BOT Resolution No. 72, series of 1997.

Then, from 1998 to 2004, the Graduate School continued its noble mission of providing advanced professional training under the baton of Dr. Remedios R. Ritaga.  In fact, it was in 1999 that  the BOT approved the offering of Master in Rural Development – Plan B (which is a non-thesis program). In the same year, Master of Arts in Instruction and Supervision majors in Science – Basic Science Education and Science- Advanced Science Education was implemented.

In 2000, another major field in Master of Arts in Instruction and Supervision  major in Communication was revised to Language Instruction. The latitude of the offerings has included the offering of Master in Public Resource Management in 2001.

From 2004 to 2006, Dr. Iluminado C. Nical was appointed again as the Graduate School Dean. Under the leadership of Dr. Nical, MAIS major in Physical Education was revised in 2004 by virtue of BOT Resolution No. 23, series of 2004.

From 2006 to 2012, Dr. Dominador O. Aguirre, Jr, served as the Dean of the Graduate School.  As his brainchild, Doctor in Management Technology was finally offered with two major fields in Public Resource Management and Business Management starting 2009. In his stint as the Vice President for Academic Affairs, Dr. Aguirre was able to bring in opportunities to the Graduate School.

Dr. Evangeline Cayanong, from 2012 to 2018, took care of the master’s and doctorate level programs with the progression in the levels of  accredited programs, most particularly the attainment of Level III – Reaccredited status for MAED and PhD programs and the MRD program. Further, the change of nomenclature of Master of Arts in Instruction and Supervision to Master of Arts in Education in all the five major fields as well as the change of nomenclature from MA in Industrial Education to MAED major in Industrial Education, both in 2018.

With Dr. Lydia M. Morante taking the helm as the Graduate School Dean from 2019 to August 01, 2021, the accreditation of the graduate programs continued to be a priority and initial preparations for COPC compliance marked her leadership in the Graduate School. Enhancement and revisions of the existing graduate curricula were also done. To name a few, the  revised graduate programs: Doctor of Philosophy in Education major in Educational Programs Management, Master of Arts in Education major in Guidance and Counselling, and Master of Science in Information Technology, duly approved by the Board in 2019.

Through the collaborative and synergetic cooperation of all the faculty members of the Graduate School and with the strong support from the proactive stewardship of  Dr. Dennis C. de Paz, University President,  and  Dr. Lydia M. Morante, Vice President for Academic Affairs, the Graduate School is certain of the path it takes. Dr. Analyn C. Españo, the current dean, is optimistic that with synergistic atmosphere, shared vision, and strong commitment, they can altogether strengthen the research culture, impact of extension work and outcome-based graduate education in the university.

The Graduate School has adopted the following quality objectives: