The same paper was declared as the Best Paper in the Science Strand category. Meanwhile, the Best Paper for the Technology Strand was “Application of Response Surface Methodology (RSM) In the Optimization of Brined-Oyster Mushroom (Pleurotus ostearatus)” by Lorina A Galvez and Inish Chris P. Mesias of Visayas State University, Baybay City.

On the other hand, the Best Paper for Engineering Strand was “Optimization of the Subsequent (TRANS)Esterification Process of Mahogany (SWIETENIA MACROPHYLLA) Seed Lipid using Supercritical Carbon Dioxide and Methanol” by Juvyneil E. Cartel and Joseph Auresenia of Eastern Visayas State University and De La Salle University.

In addition, the Best Paper for Mathematics Strand was “Assessing the Factorial Validity of the Community of Inquiry Instrument (COI) in Filipino Students: A Confirmatory Factor Analysis” by Ma. Erenita V. Bahian, Edward B. Bertulfo, and Joel Maraviles of Eastern Visayas State University-Ormoc Campus.

The papers were judged based on technical novelty, 25%; academic significance, 25%; contribution to the community, 25%; and quality of information, 25%.

The conduct of the annual International Science, Technology, Engineering, Agri-Fisheries and Mathematics (ISTEAM) Research Congress has been a part of the Eastern Visayas State University’s commitment to raise the bar of research excellence in the academe and contribute significantly to the explosion of knowledge.

The Awarding Ceremony and the Day 3 of the event became more meaningful with the plenary talk of Dr. Michael Summers, Professor of Chemistry and Biochemistry, University of Maryland, United States of America and Engr. Ernesto M. Granada, DOST Regional Director 8 with his message on digital transformation being done by the Department of Science and Technology. 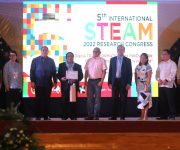 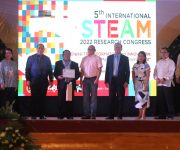 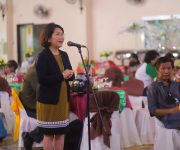 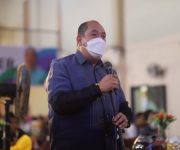