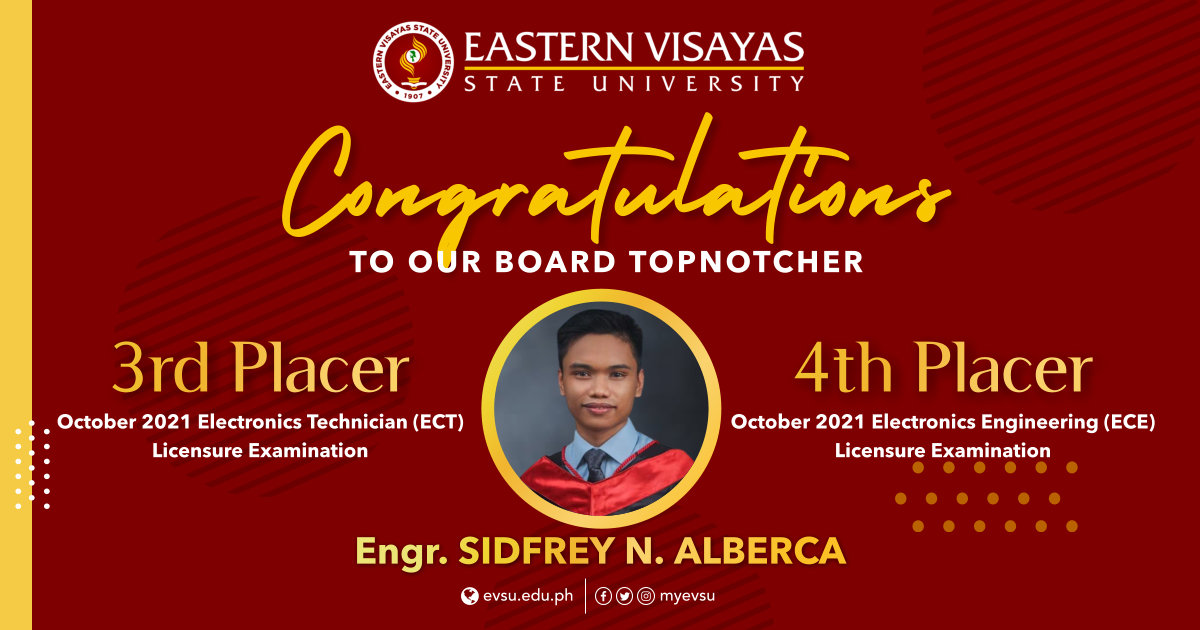 Eastern Visayas State University once again brings and captivates the spotlight of merit as another academic milestone was unlocked when a fellow Evsunista aced not only one, but two licensure examinations in his field of study.

Sidfrey Nacional Alberca raises the banner of distinction and promotes culture of excellence when he represents EVSU Main Campus during the licensure exam.

As a graduate with flying colors of Bachelor of Science in Electronics and Communications Engineering (BSECE) at EVSU-Main Campus in 2020, it was with passion and hard work that made him achieve such victorious coup.

This serves as the reflection as to how instruction and pedagogy of the university are at par with the global enterprise in promoting education towards sustainability through relevant trainings of its graduates.

“Dreams delayed are not dreams denied. As cliché as this phrase gets, it’s truly one of the things I’ve learned throughout my review and the licensure examinations journey,” Alberca said.

It was with fear that pandemic made him complacent as he focused more on his work because the said examination was held in abeyance due to the increasing number Covid-19 cases in the country. However, it did not curb him to cover his dreams underneath the shadow of menace, rather, he soared high and explore the possibilities of life.

He extends his gratitude to the support system who serves as his source of inspiration in the great battle he faces. “This could not have been possible without people, institution and organizations who supported me throughout this journey,” he emphasized.

Amidst all these, he afforded to empower future examinees that it really takes hard work and commitment before one achieves the constellation of success. “In life, you’re never too early or too late, only in God’s perfect time. Have faith, believe and all good things will follow.” Alberca concluded.